Warning: Declaration of aec_contributor_list::form() should be compatible with WP_Widget::form($instance) in /home/cace/cace.ns.ca/wp-content/plugins/ajax-event-calendar/inc/widget-contributors.php on line 61
 CACE Partners | CACE The Council on African Canadian Education | Halifax, Nova Scotia

To add this web page to the home screen of your mobile device: tap

and then Add to Home Screen.

The African Canadian Services Division, located within the Public Schools Branch of the Nova Scotia Department of Education, was established in February of 1996 to implement the Department’s response to the BLAC Report on Education, Redressing Inequity Empowering Black Learners.

The Delmore “Buddy” Daye Learning Institute (DBDLI) was founded as a direct result of the work done by the Black Learners Advisory Committee (BLAC), established in 1990 by the provincial government to ensure an Africentric approach to African Nova Scotian/African Canadian education.

With a Province wide mandate, the activities of the DBDLI are predicated on connecting with and serving African Nova Scotian learners and their communities.

By identifying the gaps and educational equity issues, the Delmore “Buddy” Daye Learning Institute strives to ensure that all learners can benefit from its Africentric research, publications, and educational resources.

The Black Educators Association (BEA) was founded in 1969 with a mission to monitor and ensure the development of an equitable education system, so that African Nova Scotians are able to achieve their maximum potential.

Demonstrating a strong commitment as a grassroots organization, BEA also coordinates its efforts with the Department of Education, the African Canadian Services Division, community groups, parent associations, school boards, as well as other educational bodies. BEA is a volunteer, non-profit organization.

BEA has been involved in the establishment and development of numerous projects and programs including:

The Black Cultural Centre for N.S. is located just outside of Dartmouth, at the corner of Cherry Brook Road and Main Street. It is situated on a three-acre lot, in a large two-story wood and brick building, and is easily accessible by car or public transit.

The Centre houses a museum section, an auditorium, gift shop, RCMP Community Office, and a reference library. A colorful array of exhibitions, publications and souvenirs await you when you come to Nova Scotia and visit Atlantic Canada’s first and only Black Cultural Centre. Discover the remarkable history of the rich African Heritage we have to share!

Birth and development of the African United Baptist Association.

The African United Baptist Association (AUBA) groups together twenty one churches scattered all over Nova Scotia. The beginnings of the Association go all the way back to the arrival of free blacks, indentured servants and slaves following the American revolution. The work of Reverend David George, Father John Burton and Reverend Father Richard Preston is paramount.

Birth of the African Baptist Association

With a base at Cornwallis St Church, Rev. Preston set out to visit black communities all over the province. By 1853, there were twelve churches established and pastored by Rev. Preston. Rev Preston brought them together on Granville Mountain and the African United Baptist Church was born. The first annual meeting took place in 1854.

Organizationally, the AUBA is run by an executive comprising the chairs of all committees, all pastors, and presidents of the three Lay groups, the Women’s Institute, the Laymen’s Council and the Baptist Youth Fellowship. The Association Moderator elected every two years is the head of the Association.

The annual Association meetings have always been and continue to be the main event. Churches close their own services to the join the great company of believers in fellowship and business meetings.

The lay groups are one of the greatest success stories of the AUBA. There is the Women’s Institute which brings together all the women’s groups from the various churches. The Laymen’s conference brings together the brotherhood groups in the churches. Last but not least, the Baptist Youth Fellowship brings energy and focus to the youth work. Each group operates in a semi autonomous fashion doing their work and reporting to the larger body. All groups have a high level of participation. Each group also leads a worship service at the annual Association meetings.

Harry Wrenfree, a Baptist preacher and historian has made this very important comment on Black Baptist work.

The work among blacks in the Maritimes was undertaken mostly by blacks, and their churches were established from within. Their continued growth in the face of extreme poverty, daunting obstacles and narrow prejudice doubtless resulted from their fine independence of spirit, convincing courage and deep dedication to the God who had led the exodus of an earlier people. No other minority group in North America has borne such fruit.

Today the AUBA remains the biggest, strongest and most durable organization serving people of African descent in Nova Scotia. The Association now has a Regional Minister and maintains an office at the East Preston Board of Trade mall. 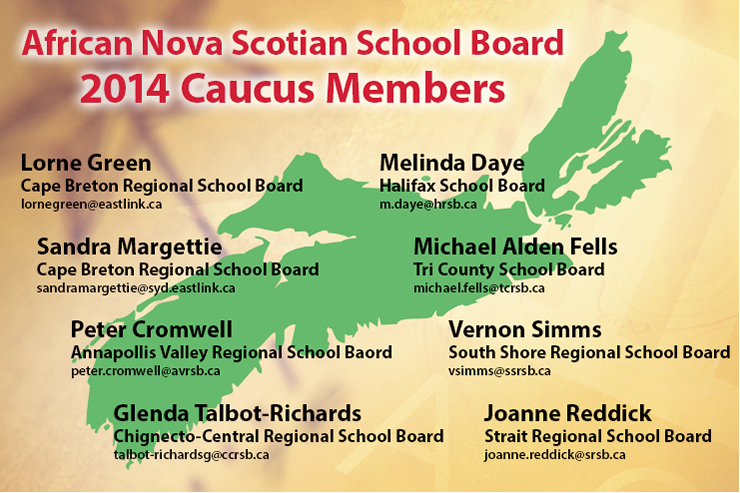 The group formed itself in December 2000 following the implementation of ground breaking government legislation resulting in the creation of the designated seats for African Nova Scotians on all seven English-speaking school boards across the province.

The principle purpose and goal for forming an ANSSBC is to provide structured opportunities for African Nova Scotian School Board representation to exchange information, ideas and strategies that could potentially enhance their effectiveness and influence on school boards.

A second goal of the ANSSBC is to provide structured opportunities for networking with other key partners in the African Nova Scotian educational infrastructure such as: The Black Educators Association (BEA), African Canadian Services Division (ACSD), Race Relation Staff, and the Council on African Canadian Education (CACE).

Members of the ANSSBC are active participants of the Nova Scotia School Board Association (NSSBA).

The ANSSC Caucus meets quarterly, usually in Halifax. Technical, logistical, administrative and financial support to the ANSSBC is provided and facilitated through the Council on African Canadian Education.

The Council on African Canadian Education (CACE) is the outgrowth of the Black Learners Advisory Committee (BLAC). Formed in 1990, the BLAC was the response to ongoing struggles of African Nova Scotians to eliminate racism and receive equity in education. Read More »